Eight members assembled beside the dam wall on a dull and decidedly chilly morning to be greeted by an absolute dearth of birds.  In addition to us, a group of birders from DOS were being similarly disappointed.  Suddenly the misery was dispelled by a shout of Goshawk!  Overhead planed the distinct shape with its long tail with rounded corners, broad waist and bulk.  Still frozen but now elated, we travelled to the north end of Howden reservoir and walked up through the forest to Slippery Stones getting few sightings of birds but hearing chaffinch, coal tits and wrens. Beyond the woodland, the valley was sheltered and walking was pleasant.  The birding also improved with good views of a male peregrine combing the hillside for breakfast followed shortly afterwards by a Dipper.  After that our labouring uphill to the lunch spot was rewarded by a well earned ‘sit’, a Red Grouse, Mistle Thrush, possible Raven but little else.  Returning to the cars, three of the party extended the day by walking up the river Westend and suffered the same paucity of birdlife though another Dipper and a Tree Creeper could be added to our meagre list of 16 species.  There was also the small bonus of good views of mating frogs – probably later here because of the cold. 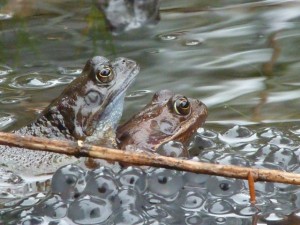 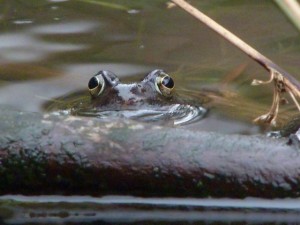 “Are you looking at me?”

In conclusion, a trip of mixed fortunes with views of Goshawk, Dipper and Peregrine being the highlights.  Our hoped for afternoon attempt to see Ring Ouzels was cancelled as they don’t seem to have yet migrated into the UK.  However, when they do, we may arrange another trip to see them – keep an eye on the website.