This section outlines the historical development of the land which now constitutes the lower Jim Mart Nature Reserve, and covers the period up to 2005. Input from any one who can provide more content, or correct what there is, will be warmly welcomed.

Sanderson’s map Twenty Miles around Mansfield, surveyed between 1830 and 1834 and printed at a scale of 2 ¼ inches to the mile, shows that the land now occupied by the Jim Mart Nature Reserve was part of a single enclosed field with the brook running through it. The field included both the current reserve and the two fields south of the reserve, as far as the existing woodland near Press Lane Farm (named on the map as Gratton). The woodland immediately adjacent to the north-east corner of the reserve did not exist at that time. (The first edition of the one inch to the mile Ordnance Survey map, sheet 82 Chesterfield and Sheffield, surveyed 1838-9, indicates that Gratton had by now become Press Farm.)

Early editions of the Ordnance Survey 1:2500 series (approximately twenty-five inches to the mile) map show that the site became split between agriculture, presumably as an open field, and use for water storage and processing. This division of usage existed for at least 100 years, during which time the water works expanded in phases onto the west side of Press Brook.

The Ordnance Survey 1:2500 map dating from around 1879-85 (see below) shows that the large field of the 1830’s had been split up to give the current separation between the land that is now the reserve, and the farm to the south, and a reservoir had been built on the east side of the brook. In addition, that part of the reserve lying to the west of the brook had been divided into two fields (numbered 1858 and 1859 on the map), with a roughly north-south split. 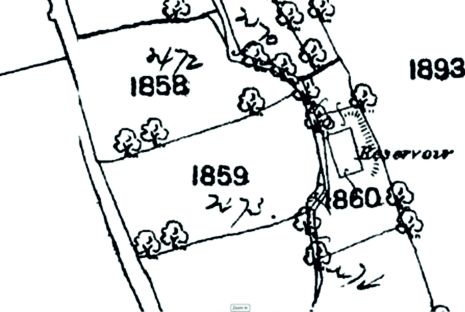 By the time, circa 1898-9, of the next 1:2500 series map, the land on the west of the brook was still split in two (numbered 948 and 893 on the map below), but the split was now roughly east-west, and the current track down to the brook had been established. The reservoir is shown as split into two halves and a small building is shown (not extant). The reservoir is also captioned as Clay Cross W. W.. Records exist in Derbyshire Records Office relating to ‘Clay Cross Waterworks, involving proposed reservoir at Press Brook and acqueduct through Ashover and North Wingfield 1855’, although they have not yet been researched to see if they relate to the specific installation at the reserve.
(Note: the reservoir on the reserve should not be confused with the three much larger Chesterfield Union Water Works reservoirs that had been constructed further upstream.)

The 1917 1:2500 series map (see below) shows that the land on the west of the brook was still split roughly east-west, the section nearest the brook now had an arrangement of filter beds, and that the water works were operated by Clay Cross Urban District Council (formed around 1875). In the late 1930s the situation was unchanged, according to the Ordnance Survey 1:10580 map. 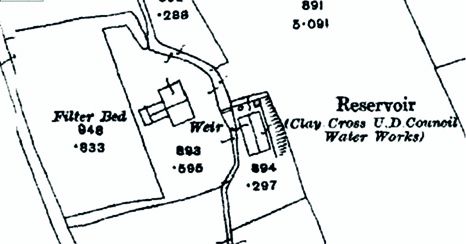 Subsequent expansion of the waterworks was recorded on the 1:2500 map from the early 1960s, with the disappearance of the division of the field west of the brook, additional infrastructure, realignment of the brook and a new, apparently landscaped, turning circle for vehicles. 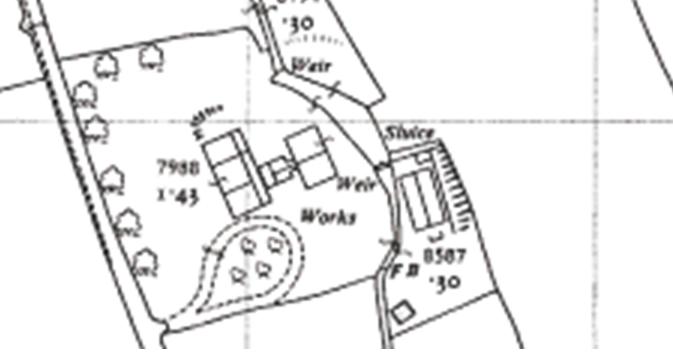 When the site later reverted to agricultural use the majority of the above-ground structures were demolished and some of the open storage / filter beds filled in.

The important features inherited from the water works are as follows: