This was an incredibly successful trip which, while the group experienced some mixed weather, was nonetheless able to bird every day, clocking up 114 different species including most of the iconic birds that the Highlands are famous for.  The group was led by Dag Marshall who delivered a tremendous menu of different birds, places and habitats over the week.  He also arranged our accommodation at the Nethy Bridge Hotel which catered well for our needs.

The group of 8 travelled overnight in a minibus to the Cairngorm area, arriving at the Abernethy Forest at some ridiculously early, but magical hour in the morning.  The birds were up and about, but hard as we tried, we couldn’t find Capercaillie and merely heard Black Grouse chuckling in the distance.  However, we did see 5 Cuckoos flying, had a number of sightings of Crested Tits and in the windless conditions, the party was able to tune ears to the songs and calls of the less common woodland birds such as Redstart and Tree Pipit.

On the second day, we managed to get distant views of an Osprey with a massive trout and then Paul Beard spotted our one and only Black Grouse of the week.  The group then chose the lazy option of a trip up Cairngorm on the funicular railway.  Conditions at the terminal restaurant were pretty miserable with low cloud and at times a heavy drizzle.  However, on the occasions when the cloud cleared, we did get to see those birds that this mountain is famous for i.e. Ptarmigan, Dotterel, Snow Bunting and Ring Ouzel. 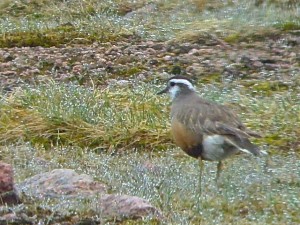 To round off the day we were lucky to catch up with Slavonian Grebe. 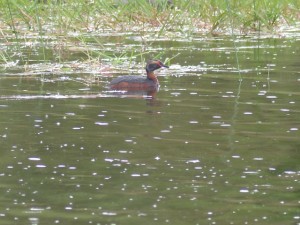 Tuesday was our worst day with periods of heavy drizzle and midges being a nuisance but we still got sightings of Scottish Crossbills.

As compensation, Dag whistled up some good weather for Wednesday and took us to the seaside.  Buckets and spades were discarded at the sighting of sea ducks (Eiders and Common Scoter), Red Breasted Mergansers and all three Divers.  Sadly, the Little Terns that we hoped to see were absent though in compensation we were able to study a flock of Sanderling in a variety of plumages.  By way of variety, the return was across the mountains, where at one stop, teacher made us learn the call of the Lesser Redpoll.

While all our days out provided excellent experiences, the one that stands out was Friday.  Starting with a specially arranged breakfast at 05:00, we headed over to the west coast.  Plagued by low cloud and coastal mist early on, the weather bucked up and we had gorgeous weather from 11:00 onwards.  Sea watching near Gairloch delivered close views of a family of Black Throated Divers, plenty of Great Skuas, Shag and Black Guillemot. 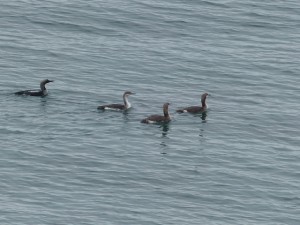 Loch Gairloch was like a millpond and with sea watching so absorbing with all three species of Diver at all points of the compass, only Dag saw the low flying Sea Eagle which sadly, disappeared over the horizon.  The day got even better with our one and only pub lunch in the fabulously situated inn at Badachro.  Following this, it was down to Red Point for a walk across the grassy headland which was alive with Meadow Pipits, Skylarks and the occasional Twite then down to the beach where off shore we spotted perhaps the most surprising siting of the holiday – a pair of Long Tailed Ducks in full breeding plumage (clearly these two were too lazy to fly to Iceland/Scandanavia or maybe their SatNav wasn’t working).  To top the day off (as if this was necessary), we were treated to close views of Golden Eagles in the area around Loch Maree.

The final day brought more sightings of Golden Eagles in Strathconan including one dramatic incident when a visiting Osprey was told to clear off by the King of the glen.  Finally, in the Findhorn Valley the rest of us got a view of a Sea Eagle. 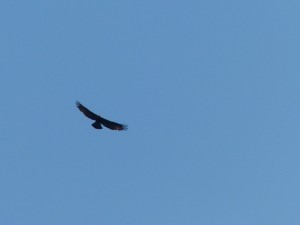 Thanks to Dag for arranging all the above and for driving and to Gary Overton who did a lot of the driving.