Posted on September 5, 2015 by Peter Faulkner 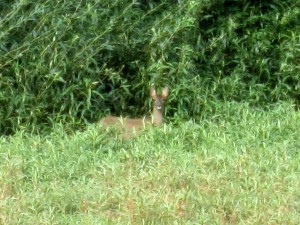 This month’s guided walk group noted a distinctly autumnal feel in the air as Paul Beard led seventeen souls on the ever popular Brackenfield loop. Large numbers of House Martins, Swallows and a few Sand Martins gathering over the reservoir indicated that our summer visitors were starting to feel the northerly chill as well.

A fast pace suggested that Chesterfield were playing at home and the group were soon spread out over the initial leg of the route. At Brackenfield Church the leading group of seven broke with tradition and headed off on the loop in an anti-clockwise direction, without leaving word of their intentions, whilst the seven tail-enders (having already lost three early retirees, and any sight of the leader’s group) assumed that the normal clockwise direction had been taken. The two groups subsequently met head on but each continued on its own way, falling back into line again at the Church.
(Chesterfield subsequently lost 2-3 to Wigan Athletic.)

This entry was posted in Guided Walk Reports. Bookmark the permalink.