In spite of the rather dodgy weather forecast, this was a well attended trip with 12 members arriving at the allotted hour.  Half the party then retired to the visitors’ centre for hot drinks and a guided tour by the warden of the birds that could be seen through the windows. The more independent half of the group walked a few metres down the track and did the same thing but without the hot drink and free ID help. Both groups however, did spot a Little Stint, Ruff, 100s of Dunlin and Ringed Plovers and the 5000+ Black-tailed

Godwits that had retreated from the Wash in the face of an extremely high tide.
Reunited, we all made our way down towards the sea wall anxious to get a view of the Long-billed Dowitcher (North American vagrant). On the way we got excellent views of 4 elegant Spotted Redshank. This delayed us somewhat so that when we arrived at the spot from where the Dowitcher could be seen, it unobligingly went and hid in the rushes.
In a state of considerable disappointment, the team then trekked along the sea wall where we were rewarded by a ‘hoard’ of Yellow Wagtails. On to the East Hide where lunch was taken and then to the Reed Bed Hide where a Water Rail was Spotted and then to the 360 Degree Hide. Two of the group, driven by the call of nature, had in the meantime, retreated to the visitors’ centre. On their return, they diverted to the Dowitcher view spot and were able to phone through to the rest of us that it was showing well. Immediately scopes were shouldered and it was amazing to see how fast folks could walk with the possibility of seeing a ‘Lifer’. All the effort was then rewarded with excellent fairly close views. 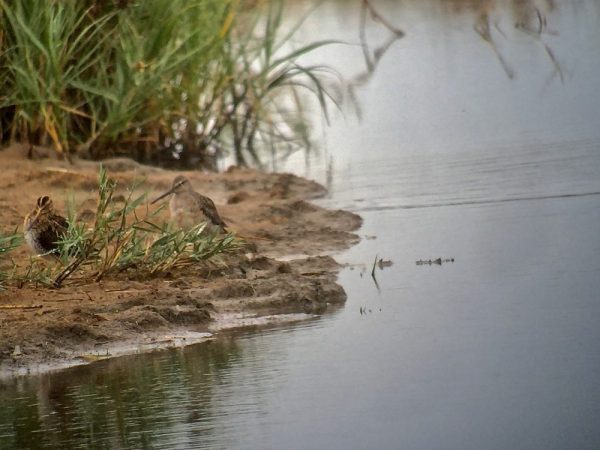 As we were returning to the Visitors Centre, a female Marsh Harrier put in an appearance. It drifted lazily across the reserve causing consternation where ever it went. In all 53 species were identified, the stars of the show other than the Dowitcher being the Spotted Redshanks, Little Stints, Curlew Sandpipers, Green Sandpipers, a Hobby and a Black-necked Grebe. As we drove away, we were well entertained by a female Sparrowhawk which flew along in front of us  for several hundred yards rarely more than a metre above the ground.