Ogston Reservoir lies approximately two miles south west of Clay Cross in the northern area of the Amber Valley. It was formed in the years of 1957/58 by damming the River Amber at the south end of the valley adjacent to Ogston Hall. Originally its purpose was to meet the demands and requirements of the now closed Avenue (Carbonisation) Plant at Wingerworth. With the Avenue Plant providing their own water demands on site, the reservoir through its water treatment plant now serves the whole of North East Derbyshire with domestic water. The reservoir covers some two hundred acres and is bound by steep banks on the eastern side, the dam wall and by shallow banks along the rest of its perimeter. In winter the water level is usually full to capacity but from spring to late autumn in some years the level can drop considerably. This allows the more shallow areas to show expanses of mud, which is an ideal habitat for the birds on spring and autumn passage, especially wader species. At this time the areas of Milltown Inlet and Carr Pond dry up and the River Amber and Carr Brook can be seen.

The ‘Ogston Hide Group’, now known under its present day name of the ‘Ogston Bird Club’ was formed by a small group of dedicated bird watchers in 1969. One of the main participants was Philip Shooter, and after several years of an uphill struggle the first hide was built and erected on the West Bank in that year. Some years later another hide was installed at the water’s edge in Alders Wood, which overlooks the Chapel and Woolley Bay area. In 1984 a new hide was built and erected on the West Bank area but much closer to the waters edge. This gave better viewing facilities than the other hide which was then utilised mainly for recording. Nearly all the money to build the new hide came from a large donation by the family of ‘Frank Longdon’ upon his death. The hide is named in his memory. This hide was replaced in the year 2000 by the present one, which has disabled access and a stoned aggregate footpath leading from the car park. This was achieved using a millennium grant.

Most of the reservoir can be easily watched from the roadside or from the car parks at the North end or on the West Bank. The whole of the reservoir area and surrounding fields’ are private property with no admission except by public roads and footpaths. There are three hides from which to watch the area but these are for the use of ‘Ogston Bird Club’ members only and are kept locked at all times. There is also a new Public Hide on the West Bank, which is accessed from the West Bank public car park. While visiting the reservoir check the notice board here for all the ‘Bird News’.

The records the club collects of the bird life in the recording area are an important source of information on bird migration, breeding and population. The club produces an excellent annual report, this being free to its members. Membership is open to all bird watchers for an annual fee. 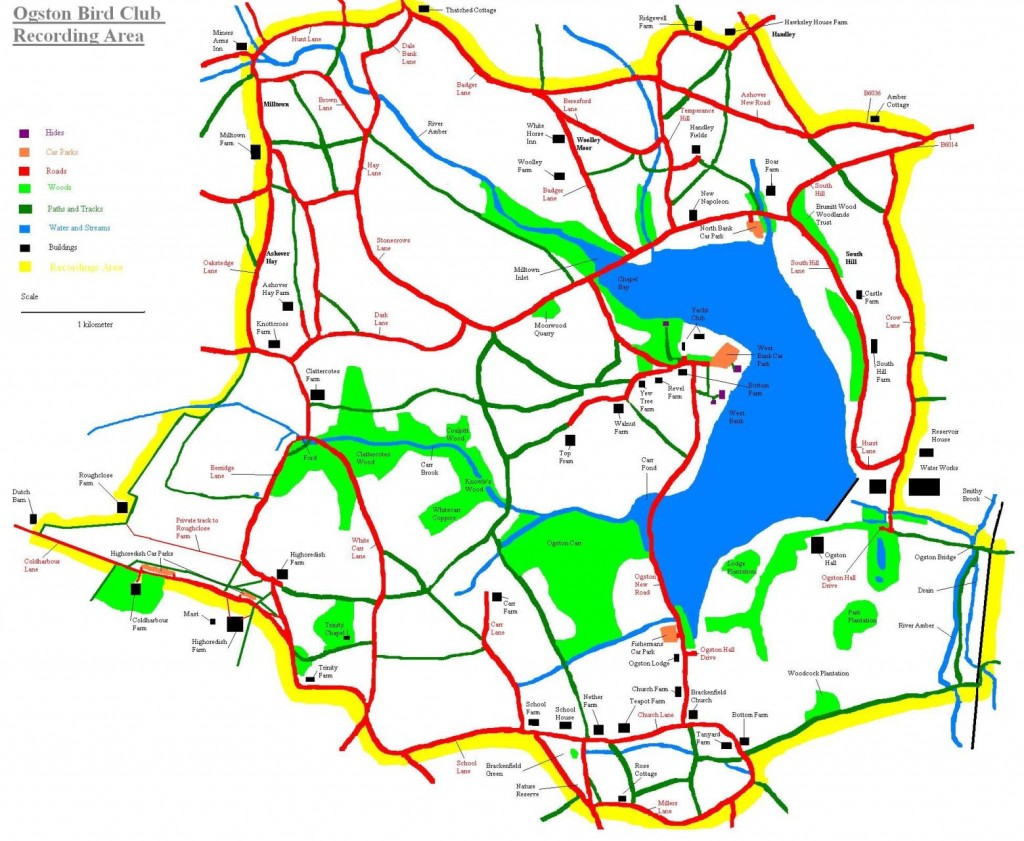 HABITAT
Woodland, farmland and small plantations mainly surround the reservoir. The fields in the early days were small with mixed hedgerows being mainly hawthorn and various deciduous trees. Over the years the local farmer has removed many of these to make larger more open fields.

The East Bank area is steep sided consisting of several fields and the South Hill Plantation with scrubland adjacent to the bank side. South Hill Lane leads to the Dam Wall, but there is no car parking space or access in this area. The whole of the reservoir can be viewed from here but with only long distance views of many of the birds.

The North Bank offers a varied habitat with small copses in and around the north car park and an area of scrub and grass close by, extending to the Northwest. Further along the bank side there is a culvert and its inlet into the reservoir. The culvert area is surrounded by trees, which attract small passerines and on the culvert itself Grey Wagtail. The old Napoleon Inn orchard still stands on the bank side in between the Culvert inlet and Woolley Bay. Woolley and Chapel Bays attract wildfowl in winter and when the water level drops it is a favourite place for waders. The River Amber runs into the reservoir at Milltown Inlet and as the water level rises this area becomes flooded. When the level of the reservoir is low and the River Amber is visible, Kingfisher can be seen feeding. The inlet is surrounded by trees mainly Willows and Conifers.

The Northwest area consists of open fields an old quarry on the Matlock Road and a small plantation on Quarry Lane adjacent to the Woolley and Chapel Bay bank side. Further along there is another disused quarry and Alders Wood, which is adjacent to the Sailing Club. The club has access to the wood with a hide overlooking Chapel and Woolley Bay and part of the north bank area. Alders Wood attracts a variety of small birds and a Rookery that has approximately 25 rooks nests most years.

Along the West Bank is the car park were most of the north West Bank area of scrub and grass areas can be watched. The new footpath access leads from this car park to the two hides on the West Bank. The gate and hides are always kept locked. The main focal point and viewing area for bird watchers is now the new hide, which also doubles as the recording hide. The whole of the West Bank is mainly scrub, rough grass and bushes with large expanses of mud when the water level drops usually in late summer and autumn. Two small scrapes are to be created in front of the hide and two reed-fringed ponds lie adjacent to the hide.

The south West Bank again consists of some rough grass but mainly a small plantation of willows right up to Ogston Hall Drive. Some management work has been carried out on the West Bank area to remove patches of willow scrub, which restricted the viewing of the water edge and further work is planned by Severn Trent Water Plc. To the Southwest and adjacent to the reservoir is Carr Wood, strictly no access. The Carr Brook runs adjacent to the wood on the north side and into an area of willow scrub which when flooded is known as Carr Pond.

Further to the Southwest is Ogston Hall Drive, which is strictly private. Along the Hall Drive is the Lodge Plantation and various other small plantations, bushes and scrub area, which can be easily watched, although at a distance from parts of the west bank. At Church Farm the farmer has for the last few years provided a feeding station which attracts many species and is easily watched from the roadside. Further down the road you reach Brackenfield Church and churchyard. This is always worth checking as over twenty species of birds can be recorded here.

CALENDAR YEAR: Species
The reservoir and the surrounding areas provide the opportunities to watch birds in various different kinds of habitats. In the winter months, Ogston Reservoir is one of the best sites nationally to find and watch the rarer species of gulls. Fourteen different species of gulls have been recorded at the reservoir. Wildfowl numbers vary from year to year but can be quite numerous most years with several different species present. Spring and autumn passage can produce the unexpected rarity as well as the more common species. In the spring and early summer up to eight species of Warbler can be seen or heard singing around the area. The summer is a quite time with most birds busy breeding and feeding young and the Common Terns if present, can be seen feeding their young on the rafts. The autumn usually has its fair share of waders, some staying until the very late autumn period. A surprising list of rarities has been recorded at Ogston Reservoir over the last twenty-five years and these are given in more detail on the checklist published on our website.

WINTER:
Any of the three Divers or the three rarer Grebes. Bewick’s and Whooper Swans on passage often stopover. Geese flying over the area on migration and also all the common wildfowl on the reservoir. During the last few years some of the less common/rare species of wildfowl have been seen more regular such as Scaup, Goldeneye, Smew, Red-breasted Merganser, Goosander, Ruddy Duck and other species of seaduck sometimes appear during hard weather. The gull roost often holds Mediterranean, Glaucous and Iceland Gulls, Yellow Legged Gulls, Kittiwake and maybe other race Gulls! The best time is from late December until late March. Mixed flocks of Thrushes, Finches and Buntings can be seen most evenings around dusk going to roost in Carr Wood and in the late winter Woodcock flying over.

SPRING:
The almost annual passage of at least one Osprey with more sightings of Hobby. At this time of year wader passage at the reservoir is sparse, probably due to the high water level but usually Oystercatcher, Little Ringed Plover, Dunlin, Common Snipe and Redshank can be seen. Large flocks of hirundines pass through and migrants can be found or heard on the bank sides and associated bushes and scrub. Tern passage is sometimes notable, the main species being Common. Arctic and Black Terns with the possibility of Sandwich, Little or rarer Tern species. Around the area Cuckoo, Green and Lesser-Spotted Woodpecker can be heard or seen along with other species on migration.

SUMMER:
This is comparatively quite. Several species are busy breeding and feeding young. Common Terns sometimes nest on the rafts in Woolley Bay and at the Southwest end of the reservoir and can be seen feeding young.

AUTUMN:
Passerine migrants reappear boosting the already sizeable numbers of breeding birds. In some years a sprinkling of raptors arrive at this time including Osprey, Hobby, Merlin and Common Buzzard. There are a variety of waders and although numbers of each are usually small, they may include Little Ringed and Ringed Plover, Little Stint, Curlew Sandpiper, Dunlin, Ruff, Black and Bar-tailed Godwit, Whimbrel, Curlew, Spotted Redshank, Redshank, Greenshank, Green, Wood and Common Sandpiper. In the very late autumn there is a chance of Golden Plover, Grey Plover, Knot and Turnstone. Hirundine numbers peak in late August early September and Terns again appear on passage.

NB. Many thanks to Terry Bingham, Richard Taylor, Pat Snodin & Richard Wesley for their help in compiling this document.