With the weather set fair, the trip could hardly do anything but succeed.  As it happened I think that it surpassed everyone’s expectations.

Twelve members met up by the Derwent Dam wall and spent the first 45 minutes scanning the surrounding woodland, sky and ridges.  Siskins were all around us, a grey and a pied wagtail were by the water’s edge and to top it all, a pair of Kestrels gave a little courtship demonstration on the far side of the reservoir while overhead a Sparrowhawk mobbed a Buzzard.

Back in the cars we headed to the terminus of the road beside Howden Reservoir, and, led by Paul, we set off to walk the 2 km up the Derwent Valley as far as Broadhead Clough.  Progress was pretty slow with interesting spectacles regularly presenting themselves and folks hanging back to watch.  Some of the highlights included a female Goosander on the lake and a Sparrowhawk, this time bombing a raven – but sadly no Goshawks.  Emerging from the woodland into the upper Derwent Valley gave us the usual moorland species of Meadow Pipit and Red Grouse and above the horizon three Buzzards two of which were exhibiting their tumbling courting behaviour.  Two of the Buzzards had white bases to their tails encouraging debate as to whether they were Rough Legged (but debate was as far as it got).  Buzzards  weren’t the only ones thinking about love because the Ravens were also at it with five in the air at anyone time and pairs sky dancing.  At the junction with Broadhead Clough, we turned up hill, with Paul driving us on with talk of Mountain Hares.   Halfway to the horizon we were stopped by the view of a possible Peregrine but a bit too quick to be sure.  However, this forced the party to pause and looking back into the main valley, we were greeted by the unmistakeable profile of a Peregrine pursuing a much larger raptor which could only be a Buzzard – but no, it too had the characteristic black moustache of a Peregrine.  We were then treated to about a minute of male and female Peregrines carrying out their high speed aerial courting behaviour with the size difference between the female and the much smaller male being amazingly apparent.

At around this time I got the impression that Paul felt that finding a Mountain Hare was the Holy Grail for the trip because he forged uphill leaving everyone else lounging in the sunshine.   Quite incredibly he flushed one from cover and even more incredibly it didn’t go very far giving us all the opportunity to get our bins on it.  Angie Slater had chased Paul up there and managed to get a decent photo of it before it loped off to hide in the reeds. 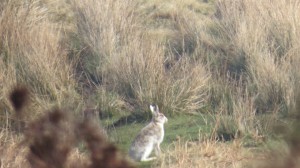 Shortly after that the party broke up with some sloping off to Fairholmes for lunch while the well prepared dossers ate their sandwiches while soaking up the view.

Species total for the day 29.

Brilliant day out.  Thanks Paul for leading us. 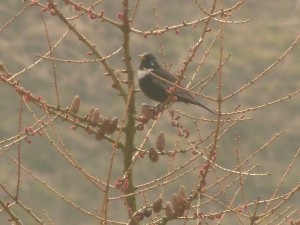 Postscript – After all had gone, I dropped by Cutthroat Bridge and was lucky enough to locate a pair of Ring Ouzels sitting at the top of a larch tree.  Indeed, they were there so long I was able to photograph them and listen to the plaintive call of the male so perfectly in keeping with the moorland environment.  Keeping them company was the equally evocative call of a Golden Plover in its display flight.