The reserve is surrounded on all sides by pasture land, with the exception of the north-east.  The fields to the east and south are managed under an agri-environment scheme and grazed with cattle, whilst the field to the north is unmanaged and has a high proportion of thistle.  The field to the west, beyond Press Lane, seemingly unimproved and with traces of ridge and furrow, is grazed fairly short by cattle and also contains thistle, which is sometimes treated with herbicide.

In the text that follows, the reference numbers for compartments and hedges are shown on the downloadable compartment map. 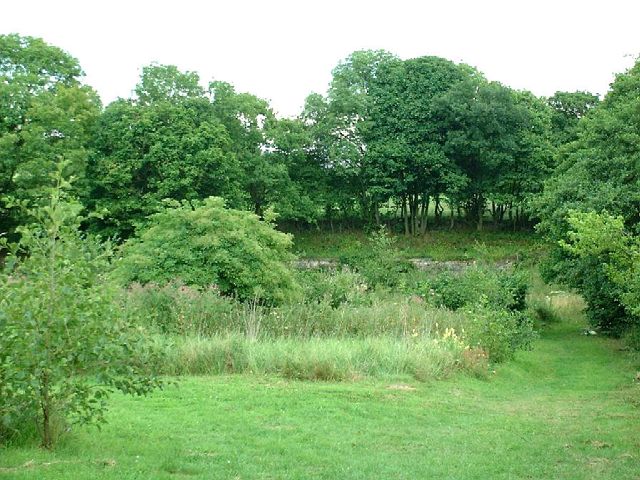 Grassland
The largest area of the reserve is given over to rough ungrazed grassland, growing on either soil over clay (mainly in C1, C2), or on thinner soil over building rubble (mainly C3a, C4, C6b, C6c).  Compartments to the north and west of the reserve tend to have a higher proportion of thistle species, typically Creeping Thistle but with some Marsh Thistle in the damper areas, probably a consequence of windblown seed from neighbouring land.  There are variations between the compartments, some of which are noted in the following paragraphs.

C1 – The north-west corner is being left as a large bramble patch.

C2 – The southern half has been planted with a few hawthorn, oak, rowan, holly, birch and wych elm saplings and will be left to become a woody/shrubby area.

C3a – There is an area of nettles which is being retained, however its spread is being contained by the annual ‘mowing’ of this compartment to provide a hay meadow element to the reserve’s habitat mosaic.

C4a – In the north east corner an area of bramble is being retained, as it is adjacent to a larger area of bramble (the northern half of C6b) on the other side of the reserve path.

C4b – An area of nettles that is being retained, but is being actively prevented from spreading into the adjacent grassland.

C6c – The northern half is an area of bramble which will be kept but prevented from spreading into the grassland.

Wetland
This small area (C6a) adjacent to the brook varies from being just damp to almost marshy in prolonged wet weather when it receives both the overflow from the Bottom Pond and seepage through the bank from the brook.  Towards the northern boundary of the reserve the ground is drier, though this may undergo change since the removal of several tall ‘Lombardy’ Poplars and planting of a mixed hedge (H1) in the spring of 2012.

The northern section tends towards tall herbs for example nettle, willowherb, meadow sweet and some introduced hemp agrimony, whilst the southern wetter section is dominated by rush.  Small hawthorns grow along the brookside and there are a few small alder trees.

Press Brook is the main feature, originating approximately 5 kilometres away near the farm at Span Carr on the A632 between Matlock and Chesterfield, and passing through three disused reservoirs (now Press Manor Fishery) before finding it’s way through the hamlet of Press to the reserve.  Leaving the reserve the brook carries on towards Clay Cross where it becomes Smithy Brook, which then joins the River Amber at its outlet from Ogston Reservoir.

The brook follows a natural channel both upstream and downstream of the reserve but, due to the site’s history as a waterworks, it is artificially constrained through the reserve. North of the central weir the channel is bounded by vertical concrete slabs and a brick-lined base, however large amounts of silt and gravel have accumulated over the years and now present a more natural and well-vegetated habitat.  South of the weir the flow continues through a deep cutting with steep banks of grass and bramble.  Press Brook is particularly prone to severe flash flooding, which has resulted in the reserve’s banks being over-topped at the weir on several occasions.

Three of the four ponds on the reserve have been created since 2006 and have been extremely successful in attracting aquatic wildlife, and wildlife watchers.  The fourth, largest and deepest pond, the Hide Pond (HP), re-utilised the original reservoir on the east side of the brook and tends to have less wildlife reported despite being overlooked by the reserve’s only hide.  It is provided with a continuous flow of water taken from, and returned to, the brook.

The Top Pond (TP) is  relatively small and shallow, planned as a ‘woodland’ pond.  It receives morning sunlight in summer but is shaded from midday onwards by trees and the nearby hedge (H2).  Inflow is from a newly dug ditch, running along the base of the hedge and intended to collect any run-off from Press Lane.  This is a usually a seasonal pond, though in the wet year of 2012 it never dried out.

Seepage through the retaining bank of the Top Pond is collected in a small ditch and directed via a settling pool to the Middle Pond (MP).  Of similar area to the Top Pond, this pond is deeper but in full sun, and has been taken over by rushes.  It has proven popular with damselflies in the past.

The Bottom Pond (BP) is the largest and deepest of the three ponds on the west side of the reserve.  It is feed by two ditches: one running along the north boundary which normally flows throughout the winter and has three small settling ponds to collect silt; and one running from the west boundary ditch, which provides only a small flow in the wettest weather.  Despite it’s volume the pond can dry out in the warmest summers due to the lack of shade, however this, and an initial issue with excessive algal growth, appear to be reducing as introduced surface cover and submerged oxygenating plants become established.

Hedgerows
The reserve boundaries are mainly delineated by lines of old hawthorn hedges with mature hedgerow trees (H1, H2, H3, H6, H7).  Since 2005 the hedges to the west and south boundaries (H2, H3) have been maintained by planting up gaps, and some laying and dead hedging has been carried out where needed.

The northern hedgeline (H1) was in an advanced stage of neglect, with very old hawthorns shaded by mature trees running along the edge of a deep ditch, the whole patched up with a variety of pieces of mesh fencing.  A decision was taken to remove all the old fencing and clear away any dead wood, but to retain the old growth hawthorns, a crab apple and the mature trees, with the exception of several tall ‘Lombardy’ Poplars nearer the brook.  With the agreement of the owner of the field to the north, a new mixed hedge was planted in two phases in the autumn of 2011 and spring of 2012, about 2 metres beyond the ditch and parallel with the old hedge line.  Around 350 plants were used, mainly hawthorn, mixed with hazel, crab apple, cherry, holly,and purging buckthorn.  Alder buckthorn and alder were mixed in with hawthorn in the damper ground near the brook.

New internal hedges (H4, H5) were planted up in 2006, again with a variety of plants included some blackthorn and hornbeam.

Other habitats
The south east corner of the reserve (C5a), east of the brook, is a brownfield site which previously contained buildings of various shapes, sizes and construction material.  Only one brick building and the foundations of another are visible now, however the slope leading up to the natural bank below the east boundary fence is artificial, being composed of mostly large blocks of reinforced concrete building rubble.  This slope contains mainly ruderals, e.g. nettle and bramble, and some self-seeded tree saplings.  Between the slope and the brook the ground is level and the vegetation in places naturally short, probably due to both the lack of soil and to trampling by reserve work party activity.   Two large grass piles are maintained here, aimed at encouraging grass snakes to utilise the area.

Running along the east boundary above C5a and the Hide Pond is a narrow natural slope (C5b) with a south-west aspect which is popular with plants such as Lesser Celandine, Foxglove and Bluebell.

Returning to the west side of the brook there is a small area (C7) entirely surrounded by a mixed hedge planted in 2006.  At ground level this area is partly managed as a sheltered flower garden (Cyril’s Patch), attracting nectaring / pollinating insects, and partly left unmanaged as long grass. More unusually, underlying the whole area is a disused vaulted water storage cavern, which has been fitted out as a bat hibernaculum.