The Jim Mart Nature Reserve is located near the hamlet of Press and is open to Ogston Bird Club members only. There are no Public Rights of Way on the site, however the public can view the site from Press Lane.
Follow this link to the Location page. 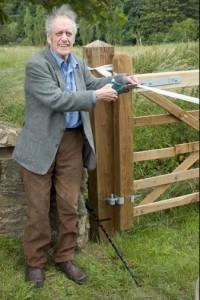 In 2005 Mr Jim Mart, a local small-scale farmer offered land to Ogston Bird Club for use and development as a nature reserve and, following a Special General Meeting, ownership was formally transferred in February 2007.

After making the site safe enough for visitors and after carrying out initial conservation works and surveying, the official opening was held on 13th July 2008 with Mr Mart ‘cutting the ribbon’: “It’s only a small site, but it must be the best nature reserve in England”.

Work parties to maintain the reserve are held on a needs only basis and these will be organised by email as for the Ogston site. Larger projects are occasionally undertaken in conjunction with outside organisations.  Of particular interest was the conversion, between 2009 and 2011, of a large underground water storage facility into a bat hibernaculum.  This work was carried out in conjunction with the Derbyshire Bat Conservation Group and Derbyshire Mammal Group, with funding from the Green Watch Awards and from the sale of quiz sheets organised by Sue Jones and John Bland.

The reserve is compact, just 0.7 hectares (1¾ acres), primarily rough grassland and remnants of ‘brown-field’, surrounded by hedgerows with a variety of trees of differing ages. There are four man-made ponds with associated ditches and settling pools, and a canalised stream with two weirs. There is a lack of uniformity about the site which provides a lot of natural interest and occasionally some surprises.

Maintained paths connect the most important features and members are asked to stay on these in order that most of this small-scale reserve remains as undisturbed as possible. The bat hibernaculum is strictly ‘out-of-bounds’ to human beings, including club members.

As with any natural or man-made environment there are hazards. These are largely self-evident, such as the water features and steep banks, some less obvious such as vegetation filled ditches and uneven ground off the paths. Please exercise common sense and ‘look before you leap’ to get a better view of some rarity.

The reserve is so small that you cannot get lost and while it is best savoured by wandering the paths, the map below can be downloaded as a pdf file if desired: Jim Mart map 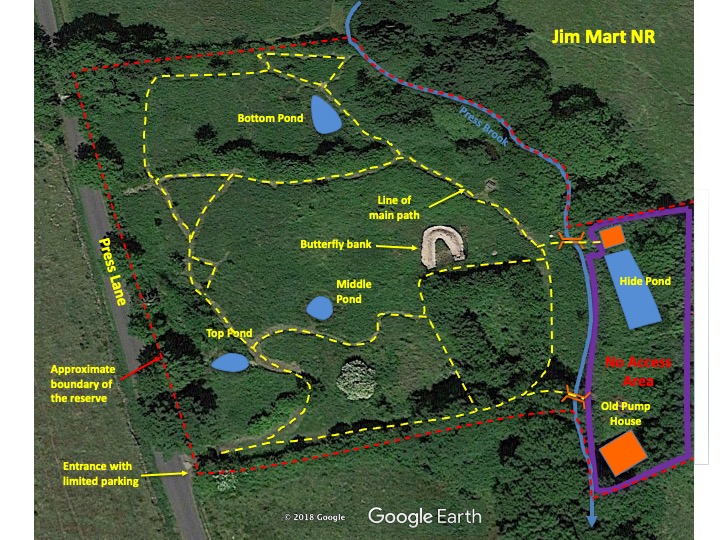 For wildlife recorders, please refer to the Species page for more information.