The majority of recording work is carried out by members on an ad-hoc basis, with sightings recorded using the Sightings Form, or sent by email to the Site Records Co-ordinator.

The reserve has 27 bird nest boxes and, in consultation with the neighbouring farm, has erected a further 20 on trees along the brook and in nearby woods.  The boxes are surveyed and maintained each winter.

In addition to the ad-hoc sightings of butterflies, a formal recording system was initiated in 2013 when the reserve was included in the county’s network of butterfly transect sites that form part of the UK Butterfly Monitoring Scheme.  A small team of members work on a rota basis to carry out the transect recording and reporting.  This involves slowly walking a fixed route around the reserve, in suitable weather, recording the numbers of each species seen in each pre-defined section of the route, once in every week from 1st April to the end of September.  The recording is repeated every year in order to built up a continuous record which can be utilised in analyses of trends at site, county and national scale.

A light trap has been operated since 2013 resulting in a moth list of over 220 species.  There remains scope for beginner or expert with their own portable light trap; the reserve, although compact, has a mix of rough grassland, wet grassland, hedgerow, riparian and deciduous woodland habitats.

Regarding plants and fungi, it would be helpful if recorders note the general location of each species found by using the reserve compartment numbers, which are shown on this map (pdf format).  Note that hedge numbers (Hn) are also used, and that aquatic and bank-slope plants can be located by the name of the water feature.

An annual survey of small mammals is carried out by the Derbyshire Mammal Group.  In 2006 a Water Vole survey was performed by Derbyshire Wildlife Trust and club members.

The total number of species recorded at the reserve from the start of record-keeping up to the end of 2016 is 949.  The importance of a nature reserve could be judged to some extent by the number of UK Priority Species it supports – 44 species recorded at the lower Jim Mart Nature Reserve fall into this category*; 12 birds, 6 mammals, 1 amphibian, 1 fish, 2 butterflies and 22 moths.
*Based on the Lowland Derbyshire Biodiversity Action Plan 2011-2020.

Seventy-eight (78) species of birds have been recorded in total, which includes all species detected on, over and from the reserve.  The number of species recorded each year is now fairly consistent, typically 45 to 50.
UK Priority Species: Bullfinch, Cuckoo, Curlew, Dunnock, Lapwing, Redpoll, Reed Bunting, Song Thrush, Spotted Flycatcher, Starling, Willow Tit, Yellowhammer. 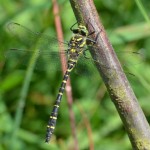 Eighteen (18) Odonata species have been recorded in total. Six common damselfly species are usually seen each year, including Banded Demoiselle.  The dragonflies are less consistent, with between 5 and 10 species seen each year out of a species list of 12.

Plants, including 31 species of trees but excluding bryophytes, make up 23% of the total species list.

Overall an impressive number of species, and there are still many animal and plant groups under-recorded. 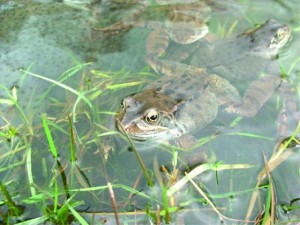