This was the second official trip of the year and again we were blessed with good weather although the wind was a bit strong for it to be really pleasant.  Six members managed to clock up 51 species with one of the highlights being a sleeping male Garganey which 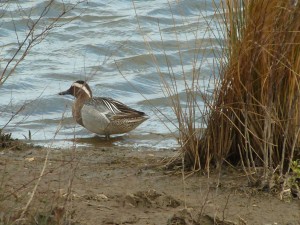 eventually co-operated by waking up and walking slowly along the mud in front of the Family hide allowing us to get some reasonable photos.  Also from here, some of us were able to see a pair of Mediterranean Gulls but these were being constantly harassed by Black Headed Gulls and so were unable to settle for very long.  Also very apparent were the migrant warblers – on the reserve, Chiffchaffs vied with Willow Warblers for our attention and towards Wath Ings, we managed to hear and then briefly see a Blackcap.  On top of this, Sand Martins were ‘hawking’ over the Mere and checking out the battery of nesting pipes. 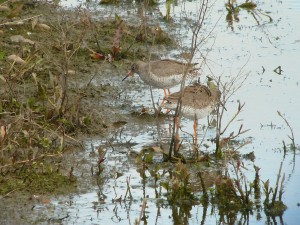 When we first arrived, John Parlby reported that the Bittern would ‘boom’ at 10:00, so suitably convinced by his persuasive argument, we set off towards the Bittern Hide where only 20 minutes late, the bird actually did it’s ‘stuff’ although it didn’t put in an appearance.  For those of you who haven’t been to Old Moor recently, the RSPB have re-modelled this part of the reserve, modifying the reed bed to the point that it’s hardly recognisable.  They’ve also removed one of the original hides and are installing two new hides which currently aren’t ready for use.

Just before lunch Jeff Davies did a photographic conjuring trick which left his lens cap on the wrong side of the window of the Wader Scrape Hide, i.e. out of reach in the long grass.  Jenny kindly offered to be dangled by her ankles from the window but this wasn’t accepted.  Following lunch, and now armed with a brace of walking sticks, Jeff managed to retrieve the cap using an advanced ‘chopstick’ technique.

Other things of note were the carpet of cowslips near the visitors centre and the large number of butterflies.  The majority of these were Peacocks but there were also significant numbers of both male and female Orange tips, a few Tortoiseshells and the occasional 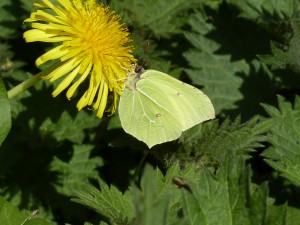