The trip this year was run on similar lines to that of last year but in contrast, we went mid April instead of early June which made an interesting change – some different species and no midges. Surprisingly, the weather was excellent throughout and although at times it was very cold early morning, we frequently had ‘wall to wall’ sunshine, and with only light winds, it often felt quite warm. We ‘ticked’ 112 species (compared to 114 the previous year) which is pretty impressive considering many of the migrants hadn’t returned.

The group numbering 10, travelled to the Cairngorms overnight Thursday landing at Loch Garten in good time for the Capercaillie watch. Sadly this proved fruitless although we did get cracking views of the 2 resident ospreys.

After breakfasting at our hotel (Nethybridge Hotel) it was out again firstly to Boat of Garten then the Findhorn Valley and finally Lochindorb. Stars of the afternoon included an Iceland Gull, a pair of peregrines, several ring Ouzels, a couple of Black Throated Divers and an Osprey bathing, chest deep in the middle of the Loch.

Saturday added Golden Eagles, a Red Throated Diver and a pair of Slavonian Grebes to our list.

Sunday’s weather looked best on the north west coast, so a 5:00 a.m. breakfast was booked and at 05:30 with the thermometer registering -1°C, the minibus left with a very quiet party aboard. As with last year, this was probably our most memorable day. Sea watching at Gruinard Bay and at Gairloch was an utter delight. The sea like a millpond and warm sunshine added to the experience. Gruinard Bay was simply teaming with both Black Throated and Great Northern Divers. In addition, we also saw 3 Slavonian Grebes in full breeding plumage and our only sighting of a White Tailed

Eagle. At Gairloch we had spectacular views of 3 Great Skuas repeatedly diving into a melee of gulls and auks that had been attracted to fish close to the surface. Lunchtime was celebrated in an alehouse – the pub at Badachro and the highlight of the afternoon was another sighting of a Golden Eagle near Kinlochewe.

On Monday, the group divided into two with the energetic going for a longish walk in the Abernethy Forest and the lazy/crocked having a strenuous ascent of Cairngorm on the funicular railway with the unjustified rewards of the Ptarmigan Café, good views of Ptarmigan in their contrasty summer plumage and a Ring Ouzel in the car park. The two groups recombined late afternoon to spend a while watching a pair of courting Ospreys.

The fifth day was spent on the north east coast at Tarbet Ness then Embo and finally at Brora. Here we were treated to rafts of Eider and Long Tailed Ducks. In addition, there were plenty of Red Breasted Mergansers, Shag, Puffins and Sandwich Terns and on the shore, 4 Purple Sandpipers. We were also treated to sightings of a large dog otter and a small group of

Bottle Nosed Dolphins. Sadly this was the occasion of our biggest ‘dip’, leading us to consider calling it ‘Dag’s Day of Disappointment’. The main purpose for the long journey was to see a Harlequin Duck at Brora. Based on poor information, we spent a couple of hours searching in the wrong place, only to find a few hours later that we had been a mere mile from the correct spot.

The highlight of day six has to be the gorgeous Caledonian Pine Forest surrounding Loch an Eilean and a proper although brief view of a crested tit. 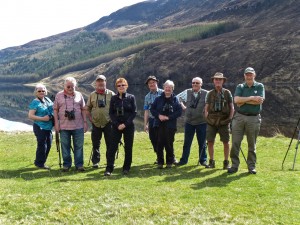 On our final day, we journeyed to Portsoy on the north coast of Aberdeenshire to see White Billed Divers, which in recent winters, have over-wintered here. We then travelled west taking in Lossiemouth and Findhorn bay and getting sightings of more common coastal species. The return journey was broken at Lochindorb where the highlights were a rough legged buzzard that turned out to be a Common Buzzard, an Osprey demonstrating its expert angling skills and some fellow birders, who drove off leaving behind their scope and tripod beside the lake.

As for last year, thanks must go to Dag Marshall for organizing this extremely enjoyable trip and for taking us to such a wide variety of habitats which provided such a rich birding experience .