Thirteen members assembled in the car park at the allotted time and because we were so numerous, got a reduced rate for entry to the reserve.  Starting birding upstairs at the visitors centre overlooking lagoon 1, it was not long before Trevor spotted the star attraction – Smew! 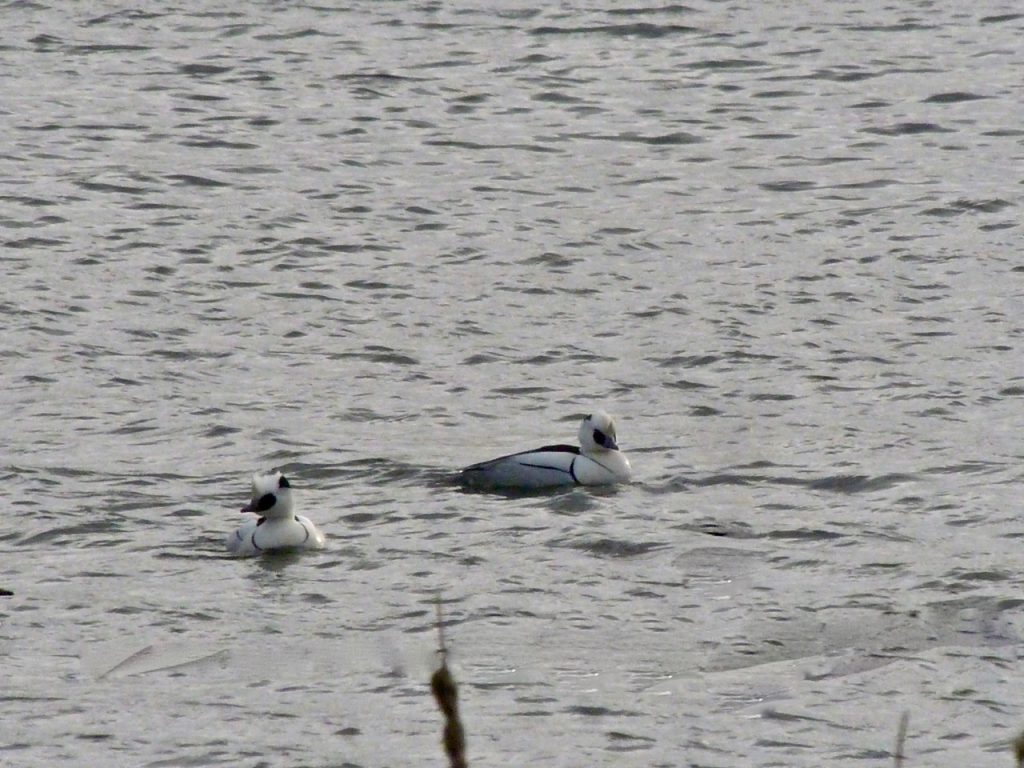 Stars of the show – Drake Smew

Not just one but 6, 3 drakes and 3 females, right in front as close as they could get. Also seen from there were several Gt White Egrets, some magnificently 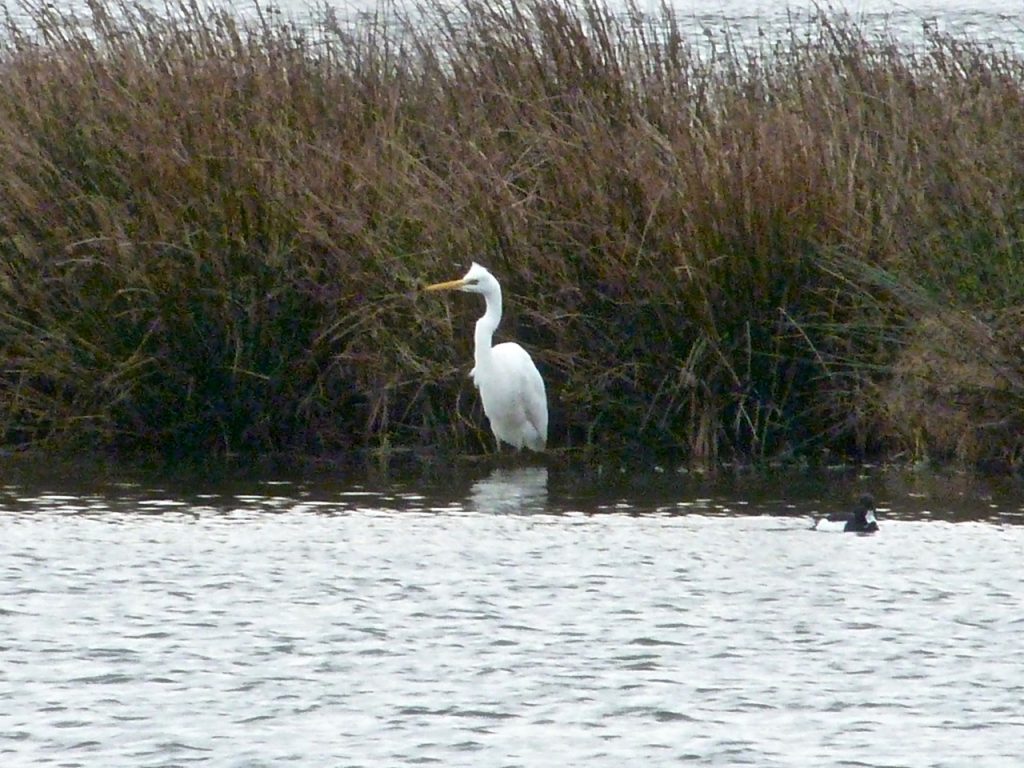 plumaged Pintail and lots of other more common species.  Indeed, we had clocked up 30 different species before we left the warmth of this most civilised bird hide. 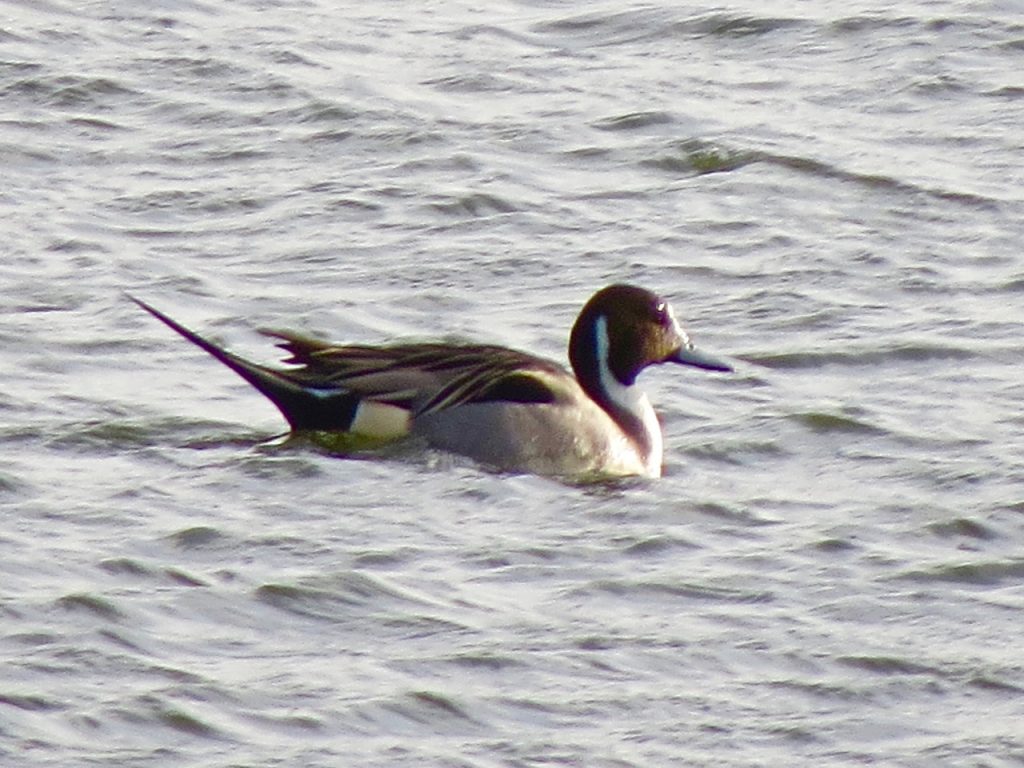 The morning was fine as we made our way north looking out for winter thrushes on our way which were notable by their complete absence.  However, just before arriving at Lagoon 4 we did get a brief glimpse of a hoped for Green Woodpecker.  At the Shoveller Hide a diligent search by Dag amongst the distant big ‘raft’ of Tufted Duck and Pochard came up with a female Scaup. There was initially doubt about the sighting until a number of others with scopes confirmed that there were at least two present.  The last hide of the morning was the Lapwing Hide which sits on an exposed peninsular.  A few hide windows having been opened resulted in a fierce and very chilly gale funnelling through, freezing the occupants and driving them away after only the briefest of stays, back to the visitors’ centre where we were allowed to eat our lunch while viewing lagoon 1 again. 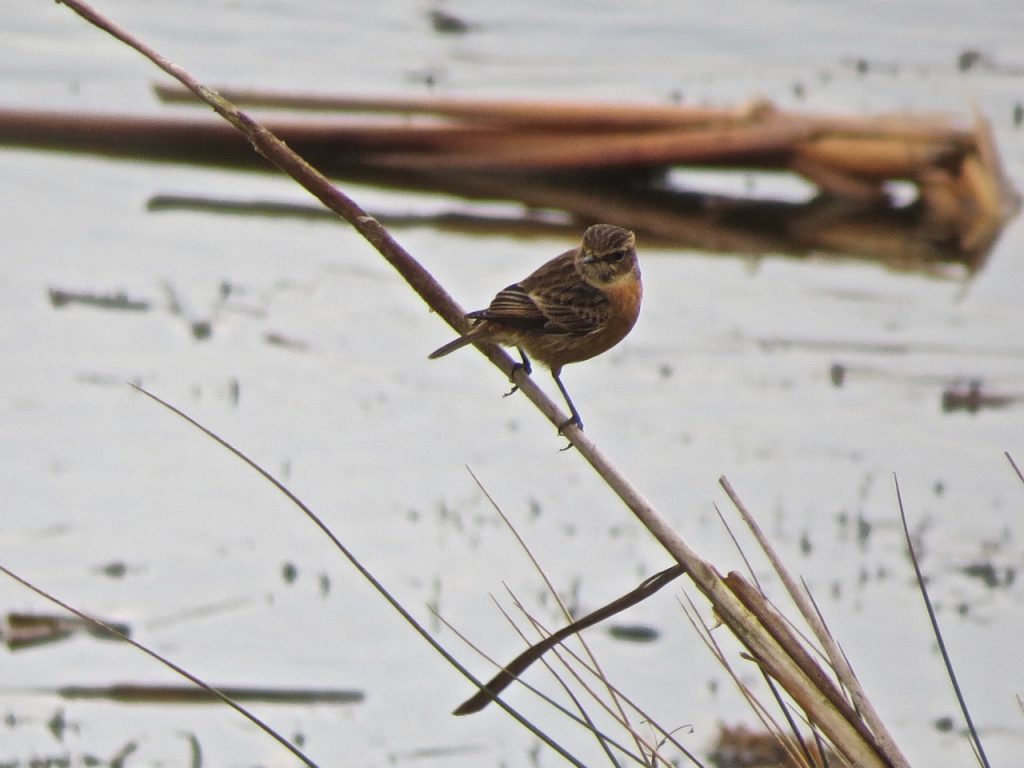 After the break, it was off to the south end of the reserve to the Teal Hide hoping to see the Red-necked Grebe.  Precisely as forecast, it started to rain just as we were entering the hide.  The search for the grebe was even harder than that for the scaup but not because it was mixed within a crowd of other water birds but because it was diving for long periods of time, it was now very dull and because it was alone on a large sheet of wave torn water.  Persistence paid off and for some, was the star spot of the day.
After that we moved to view the north arm from part way along the Hambleton Peninsular, hoping to see both Slavonian and Black-necked Grebes.  Sadly, even a determined effort gave one member only the briefest of views of a ‘Slav’ but nothing of a Black-necked.  As compensation though, 6 Red-crested Pochard were quite close.  Now, thoroughly wet, we departed Rutland but the day was not yet over as one of the group reported that there was a Slavonian Grebe and a Whooper Swan at Attenborough, close to the Visitors’ Centre.  Not sure whether that part of the trip could be described as a twitch but both birds were spotted bringing our day’s tally to 62 and a very happy group of Ogston birders.